Actual state of the hospital one and a half months after the disaster Healthcare and medical relief for local and evacuation center residents’ were separated. Relief activities in affected areas were carried out by Ishinomaki-area joint relief team organized by the disaster healthcare coordinator of Miyagi prefecture. 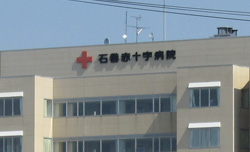 Needs for obstetrical services had increased and the number of maternity nurses was increased with assistance extended by the Japanese Red Cross Society. In March, they attended 99 deliveries, while the normal monthly number of deliveries is 45 to 50.

1) Conditions of visitor patients and measures

Right after the disaster, there were a number of hypothermia and external wound cases due to the tsunami. But at the time of this activity, the number of patients of cardiovascular disease, pulmonary thrombosis, gastric ulcer and pneumonia increased. Also, decrease of ADL (Activities of Daily Living) and various diseases due to evacuation life were observed. 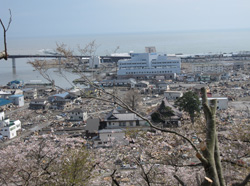 Relief teams conducted activities in local medical relief stations, and private practitioners reopened their clinics and hospitals. Hospitals accepted emergency patients by priority. The number of emergency center visitors was at the peak in the third day after the disaster, which was 1200 patients. Though the number had been decreased over 150 patients still visited per day, which was three times as many as the number in usual condition. Patients were received as general outpatient during the daytime on weekdays and in the emergency centers during weekend and nighttime, while slightly-injured patients were received in medical checkup centers.

Hospital beds were still taken up for emergency patients. Therefore, the reception of patients requiring normal hospitalization (for cancer operation and chemical therapy, etc.) could not be proceeded. Emergency patients who could not be hospitalized were transferred to Sendai or other areas. There was an urgent need to restart treatment in the local area.

Dispatch of support nurses from the headquarters of the Japanese Red Cross Society started in March 15th, the forth day after the disaster.Support had been provided in 5-day shift of nurses and maternity nurses since March 16th.Dispatched nurses had high skills and took charge of emergency areas (red and yellow areas). 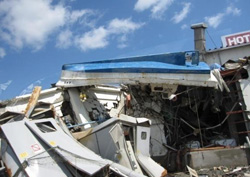 The ship which was damaged

Since March 29th, nurses working in emergency areas had been limited to ER nurses and, at the same time, nurses and maternity nurses were sent to general wards and maternity wards, respectively.

Local staff (Ishinomaki) could therefore take a rest to work on their affected houses and confirm the safety of other people.

Support nurses were engaged in practices in wards in the Red Cross relief uniform. One of the purposes of this was to make patients and their family aware of the fact that "We are in a critical situation.” With usual nursing uniform, patients might think they were staff members who were also affected by the disaster, and hesitated to talk about their bitter experiences in the disaster.

There were patients' preferences to "be cared by those in the Red Cross relief uniform" and "talk with the nurses."

2) Efforts not stated in conventional disaster manual and their needs

When the earthquake hit at 14:46 in a weekday, many people were working. Countermeasure headquarters was instituted and registered immediately and tasks were sorted out. Thanks to training for initial reaction, treatment departments in the disease and injury areas could perform as assumed in the training. However, the following 3 points were beyond the scope of the assumption. 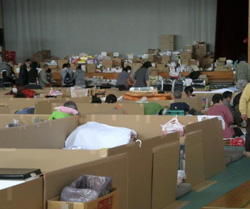 Life of an evacuee in the gymnasium

After the disaster, coordinated transfer of the increasing number of hospitalized patients and patients requiring nursing care within Ishinomaki area and neighboring prefectures was essential. The regional alliances office took a role of coordinator, and discharge coordinator nurses had important roles.

For staff members working day and night without sleeping or resting, hospital director's outside-view parlor was opened up as "refresh room."

Life and commuting supports for staff

Work days were adjusted to provide 2 consecutive days off at least once in every 2 weeks.

2) Support for nurses who had difficulty in commuting

In the first week, most staff members stayed in the hospital and worked in shift. In the second week, they started commuting.

3) Food for staff and patients

Stock of water and food for hospitalized patients for 3 days were available. The gas was not available, but in-house power generation could provide electricity. Patients and staff members were provided of 3 meals per day, but there was no reserve for evacuees. For evacuees in the hospital, transportation buses were arranged for transfer to evacuation centers and a rice ball was provided per person. Reserved water for 1 week was available and used economically.

The nursing director grasped hospital damage situation in the disaster countermeasure headquarters office, arrange human resources in each department and manage beds for receiving patients. Outpatient admission, human resource allocation and life support for affected staff were delegated to vice nursing directors, and the director made extensive efforts in information communication to each department and countermeasures against issues. Now the director has a role to disclose conditions, such as what happened due to the disaster and what activities they took. Staff members who worked in the front rank of various fields are interviewed.